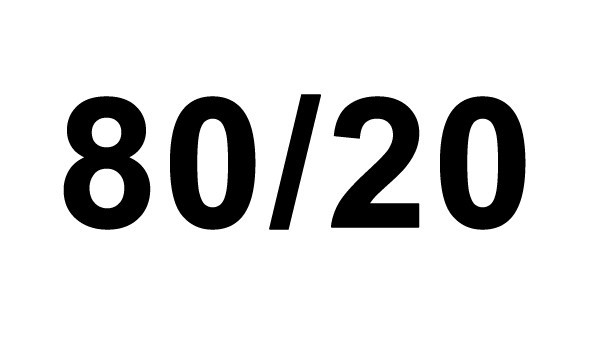 Numbers make me angry. Not so much the basic “this is more than that” use of them, but the seemingly endless overuse of them in an attempt to bring the appearance of order to a world that thrives on chaos.

In 1906, Italian economist, Vilfredo Pareto realized that 80 percent of the land in Italy was owned by 20 percent of the people.  He looked at other countries in Europe and saw the same pattern.  Ever since then, we’ve been subjected to hackneyed applications of Pareto’s Principle in everything from marketing to crime.

80% of your profits come from twenty percent of your customers.

80%  of your grey hairs come from twenty percent of your clients.

80% of the world’s energy is consumed by twenty percent of the population.

80% of the world’s crappy pop music is made by twenty percent of the boy bands.

The truth is you can use Pareto’s ideas to make just about any set of numbers sound smart.  So here’s my variation on his theme…

Make your idea 80% smarter, rather than making your execution look 20% better.  “Anyone can take a half-baked idea and make it look twenty percent better.”

Put simply, your content will be more effective if you spend more time improving the quality of the idea in the front end.  Make the thinking smarter.  Make the story more engrossing.  Make your punchline funnier.  Think like the box never existed. Ask more interesting “what if” questions.   And challenge any preconceived notions you might have about what your content can do and be.  Best of all, focusing your attention on this “eighty percent” shouldn’t cost you a dime.  If the team you’ve partnered up with to create your brand content can’t deliver on this concept, maybe you should demand more from them.

Anyone can take a half-baked idea and make it look twenty percent better.  But the real value in creative content is in the idea, the concept that connects with the audience.  This is the tip of the spear, and you always want it to be as sharp as possible.