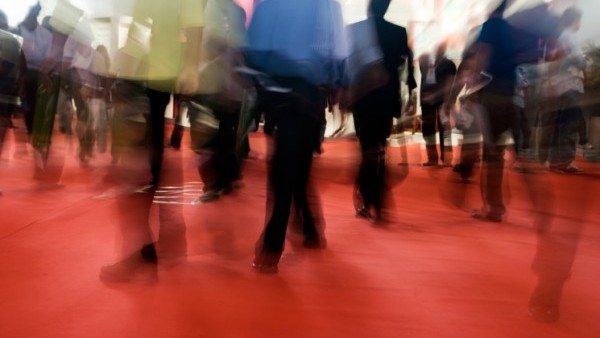 A massive opportunity for networking, proving your place in the market, and introducing yourself and your products to potential customers.

You repeat the same schpeel to everyone but unfortunatley your script is only as good as the storyteller.  And often, you, the storyteller can get exhausted.  So how can you keep your message fresh, relevant and worth a glance as tradeshow fatigue sets in for exhibitors and attendees alike?  Well, until the day you can pour energy drinks directly into your marketing methods, video is an ideal choice when it comes to media support in crowded venues.  Here are a few reasons why you need tradeshow video to help broadcast your proposals to eligible consumer eyes and ears:

On-the-spot conversations are subject to a lot of variables – a rep that comes off too strong or too weak in delivery can send potential buyers pivoting away to the booth next door.  Or, maybe Steve in accounting has stepped in to “help” the event marketing team.  Either way, a well-executed tradeshow video, complete with a story to tell, a relatively short time frame and an entertaining or an honestly informational premise will keep your buyers from passing by in search of the next handful of promotional pens.

A tradeshow video message or video-based advertising content will quickly become your “right hand man” in a convention crisis situation.  Getting a lot of people stopping by the booth?  Need to have a heart-to-heart with convention organizers about those missing cases of product?  No worries.  Your video is playing and effectively babysitting until you’re freed up.  Tradeshow video can also bridge gaps for bathroom breaks, negotiations, and other trade show realities that keep you from focusing on every individual that steps into your booth.  In a recent article for Forbes, Patrick Hull points to the fact that a lot of benefits to be gleaned from a trade show require mingling – something that is nearly impossible to do while tied to a booth.

Remember, your tradeshow video story can be assembled, dissected and redone as many times as you need it to be prior to a show.  This will keep it highly relevant, especially if you have two distinctly different target markets and tradeshows to go with each of them.  For example, if your trade show addresses different demographics – say, industry insiders on Monday, with fan entry on Tuesday – making a handful of Tradeshow Video messages to appeal to the attendees of each day is a winning strategy.  With a compelling message and decent production value (remember the 80/20 rule!) in your Tradeshow Video,  your prospects will feel as if your booth is speaking directly to them rather than broadcasting a wide band message to whomever happens to be listening.

In addition to pre-made content, “agile video content” can also be shot on-site during events, incorporating real customers that stop by, the energy of the crowd and the business-building atmosphere of the event.

These short, easily-relatable video pieces can be swiftly uploaded on the the spot to catch the wave of chatter on social media outlets, such as a convention-specific Twitter hashtag, for maximum visibility and engagement.  Remember, events are often filled with thought leaders and key members of the blogerati.  They’ll be talking on social media.  Give them something to share.

Here’s an example of Agile Video we produced while at a recent tradeshow.  It was shot, edited, uploaded and shared within a couple of hours:

But regardless of what road you take when it comes to tradeshow video, rest assured that you’re likely doing something more eye-catching and clutter breaking.  All the while, your competitor will be relying on mere pamphlets and branded ball point pens.

Breaking out of the box requires forward thinking, and Tradeshow Video – a perpetually-working representative that’s always ready with the right message – is on the forefront of new marketing.